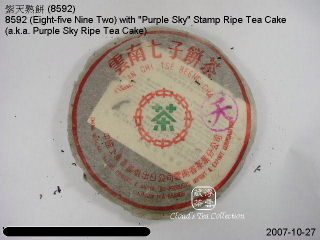 During the tea meetings in October 2008 in Malaysia, Cloud discussed several Puerh tea issues with tea lovers. It is worth sharing these discussions over the Internet. Somebody asked, "What are the differences between the aged raw tea cakes and the aged ripe tea cakes?"

The trading code of the Purple Sky Ripe Tea Cake was 8592 which was the tea product specifically ordered by Nantian Trading Company, a Hong Kong trading company, in the early 1990's. In order to differentiate it from the similar wrapping raw tea product 8582, they requested a purple-red stamp to be stamped on the wrapper. The Chinese character of the stamp is equivalent to the English word "Sky" (天, "Tian"). Therefore, this cake is also known as Purple Sky Ripe Tea Cake.

The dry tea leaves showed chestnut-red with elegant ripe tea aroma. There was no apparent earthy ripe tea smell after years of storage. It was, in fact, an attractive aged outspread aroma which made tea connoisseurs feel good. Because of its dry storage, it was free from any unpleasant earthy smell.

When boiled water interacted with the aged ripe tea leaves, the mild and elegant aged ripe tea fragrance rising gently from the tea bowl (Guiwan). It was a solid sandalwood-like aroma with soft and thick sensation. However, the color of the tea broth was not a very dark red color like other recent ripe tea. It was only a medium chestnut-red with clear tea broth. It looked as if it were dark-brown was due to the fact that there was not enough light reflection from the bottom of the deep utensil.

The final status of a fine Puerh tea is for appreciation. The Purple Sky Ripe Tea Cake had a thick, mellow and sweet tea broth. It had extra smooth texture and finish. It was really a solid tea broth as one could feel it easily. Since it has been aging for more than 15 years, there was not much obvious earthy ripe tea smell left. During appreciation, one might not feel that it was actually a ripe tea cake. To a certain extent, the taste was somehow close to the "aged raw tea". Certainly, there was still differences in the tea broth between the aged raw Puerh and the aged ripe Puerh. Even though the aged ripe tea was so mellow that it was close to the aged raw Puerh, the ripe tea broth was too smooth without much vividness and aftertaste ("Huigan") when comparing with the aged raw tea cakes. 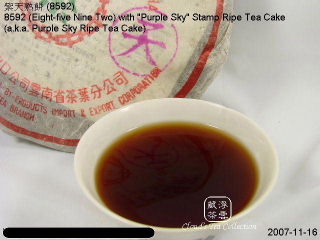 One cannot deny that the purpose of inventing ripe tea was to supply artificially fermented tea for instant consumption within a short period of time without the long natural aging process, so to speak, "people can consume the ripe tea once it is manufactured". Although ripe tea is able to age a little bit further in the next 20 to 30 years, Cloud would advise to store raw tea instead. It is because 20 years aged raw tea cakes will have more varieties than 20 years aged ripe tea cakes. Remember, ripe tea is made for instant consumption.

All in all, if The Purple Ripe Tea Cake was judged by ripe tea criteria, its performance was extra-ordinary and fantastic as it had extra fine mellowness, sweetness, smoothness and texture. If the current price is affordable, tea lovers and connoisseurs should seriously consider to have one for appreciation from time to time. Cloud is of the view that the reasonable 2009 price should be less than US$380 per piece.