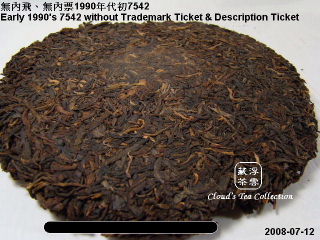 Cloud joined a traditional Chinese wedding banquet today. There were a lot of good dishes on the table. However, they were the normal greasy Guangdong cuisine such as Barbecued Whole Suckling Pig, Golden-fried Crab Meat Rolls and Golden-fried Crispy Chicken, etc. I could feel the oily feeling halfway through the banquet even thought the dishes were very delicious. When I drove home, I had been having some aged tea choices in my mind so that I could brew one immediately when I arrived.

In order to sweep away the greasy feeling and bring my body back to normal, it would be a good idea to brew a young aged Puerh tea. Certainly, from the Cloud's point of view, young aged Puerh tea meant those raw Puerh must have at least 15 years of aging. Otherwise, it would be too young to appreciate. Arriving home after the banquet, it should be nearly 11pm. It would not be wise to drink the tea which was too young. Of course, ripe Puerh tea was also one of the choices. But Cloud had aged raw Puerh vintages, the ripe Puerh tea could be reserved for the next ocassion.

After a deep thought, Cloud remembered that there was a tea in my collections having the similar taste as the Eighty-eight Raw Tea Cake (88 Qingbing) but with its younger age. That was the drily stored early 1990's 7542. Since it was younger than the Eighty-eight Raw Tea Cake (88 Qingbing), it had a younger and stronger taste which was suitable to be appreciated on a full stomach. When this tea was appreciated in other general occasions, the drinkers would normally feel hungry very soon.

Very quickly, this tea cake was located. Cloud was amazed that how fast it was. Normally speaking, it took some time to find out a specific tea cake because Cloud was unable to remember where it was put last time.

Anyway, I could not wait to open the wrapper. It was discovered that the surface and the back of the tea cake transformed. It became more reddish than before but still shiny, beautiful and attractive. As this was a drily stored tea cake, it was free from white substance. The dry tea leaves had clear appearance. The aroma from the surface of the tea cake was a slight aged plum fragrance which was so attractive and made people feel fresh and good. Again, I could not wait to boil the water immediately before I chipped off a little piece for brewing. The timing would be perfect because the water was boiled right after I just finished chipping off the tea cake.

Wow! By breaking up the tea cake, one could tell it was an almost 20 years aged vintage. There was no need to use any tool for helping while chipping off. What Cloud needed was just his own hands. It had been aged to the status that the structure of the tea cake started to loose. After taking the appropriate proportion of the tea leaves and putting them into the tea bowl, it was the showtime to have a nice brew [although Cloud was still full].

Pouring the hot water into the tea bowl, the plum aroma was released. Obviously, the fragrance of such was very different from those young tea cakes generally available in the market because those were just tea cakes less than 10 years of aging. The astringent aroma of the young raw Puerh tea was so obvious that it told you, "I am young!". However, there was no such feeling from the hot aroma of the early 1990's 7542. The fragrance it released was soft and gentle, but there was still a hidden strong force in the smell which could not be easily told unless and until one had tasted the tea broth of the early 1990's 7542, especially from the 4th, 5th and 6th infusions.

With the very hot tea broth, there was not way to drink. Otherwise, it would have burnt my tongue. Therefore, smelling the fragrance from the surface of the tea broth was another option. "Attractive", "amazing" and "fascinating" was the adjectives for describing the feeling. Cloud did not mean the fascination was the same as the very aged aromas and tastes normally found in those 1970's and 1980's Puerh vintages. It was different. It was a remarkable early aged plum smell, especially it must be found from the deep breath of such the fresh aroma.

Perfect timing! The tea broth was a little bit cooler so that drinking the liquor with a large bit would give an unexplained comfort. Perhaps, it was a strong contrast to the greasy dishes tonight. The thick but fresh tea broth swinging around the entire mouth stimulating the taste buds and the nerves was ... - Wonderful. After having several cups of such tea, everything had gone (I meant the oil!) and everything was back to normal (I meant my body!).

After having such a good tea, it was a perfect time to go to the bed. Good night.