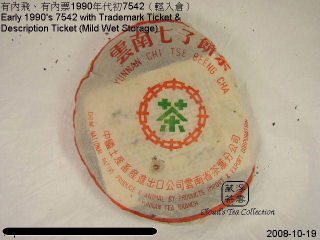 The size of this purple clay jar is slightly larger for containing more than one tea cake. It can be filled up with one and a half chipped off tea cakes. However, it is unnecessary to fill up the entire jar because the remaining room between the tea chunks and the lid allows enough air for a little further aging or revitalization (Photo A1083). When you open the lid taking out some tea leaves for brewing, you will naturally stir the tea leaves up allowing some fresh air to go in at the same time. Do you notice that the tea chunks from the bottom of a tea jar are usually tastier than those you brewed in previous sessions even though they are from the same tea cake? 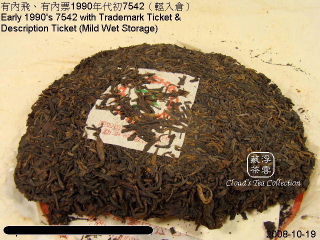 Broken Tea Cakes Scattered All Around

After a complete consumption of a tea cake, it is a natural response to take out an intact aged tea cake from the tea cellar in order to fill up the purple clay jar. In the past, it was very casual for Cloud to break the aged tea cakes. Whenever the previous chipped off tea cake could not be found, Cloud would take out another intact one from a stack of the same kind. Therefore, when Cloud has been sorting out these non-intact tea cakes recently, there were many tea cakes of the same kind just being chipped off 1/3 (as seen in Photo A1020). Some tea lovers may have similar experiences. The solution to this is to put them together and mark the box containing them as "Samples".

Photo A1020 shows you a broken tea cake without knowing when it was chipped off. Thus, Cloud decided to use up this remaining tea cake first for filling up the purple clay jar. The tea chunks containing in this jar are the daily favorite of Cloud. They are the chunks from the Early 1990's 7542 Raw Tea Cake. Although the storage condition of this broken tea cake was not completely dry, i.e. mild wet storage, it was appropriately aged under this slightly wet condition. Otherwise, this broken tea cake will still be too green and astringent. 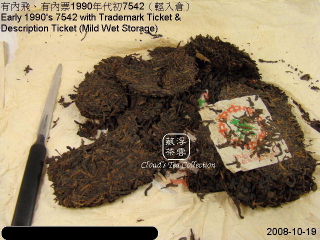 As expected, this tea cake had stable performance. With the mild wet storage condition, the tea broth was round, sweet, thick, mellow and beautiful. The only complaint from Cloud was the very slight astringency. But that comment was too harsh for this early 1990's tea cake. Don't forget, it was only a 16 years old tea cake with mild wet storage. It was definitely not at the same level of the 1970's Small Yellow Mark and the 1970's Zhongcha Brand Simplified Chinese Characters. In fact, the early 1990's 7542 is already a well aged Puerh tea vintage according to today's raw Puerh tea standard.

The aroma from this kind of mild wet tea cake would be a little bit softer and gentler, which is quite attractive and not resistible. The tea broth was vivid and full of energy. After several sips of such, one could feel and relish the incredibly graceful smoothness. These aged performances were transformed from the raw and green astringency with slight moisture. The mild dampness helped to change the astringency into the vividness and sweetness. Cloud could feel the natural beauty of this tea. The extraordinary performance of a good tea is that one will be attracted to ask for refilling the tea cup and want to drink it again and again. The aftertaste and finish of this tea also enhances the overall tea broth.

These slightly wet stored raw tea cakes with more than 10 years of aging show fantastic adequate chestnut red. This is a gorgeous color. Even though the surface of the tea cake was a little bit dull without shiny appearance, this did not damage the tea leaves compressed inside. Therefore the tea broth was still amazingly clear. Unfortunately, these kinds of well aged tea cakes are all limited edition and will be vanished one by one.