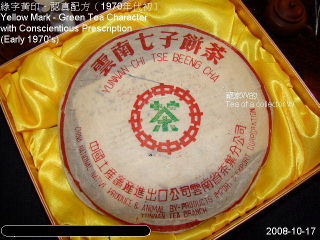 By judging from the status of dry tea leaves (the tea cake itself), the degree of compression of the second piece is quite high (being too hard) although the storage condition is clean. However, by touching and feeling the tea cake, experienced Puerh tea connoisseurs might notice that the water contents absorbed by the tea cake (the second one) was a little bit higher than average (Photo A1011). Certainly, unless the dampness was excessive, the second one was still a good piece of drily stored aged tea cake aging for more than 30 years.

Other people joining the tea session could not wait for further moment. The second piece of Conscientious Prescription was chipped off (Photo A1012). The tea session began.

It was a deep chestnut red clear tea broth as if it were a great silky red wine liquor. However, the performance of tea broth was only acceptable having the expected sweetness, thickness and aged flavor. It was not vivid enough. Since the second piece of Conscientious Prescription has been sealed by the tea vendor for many years with odor free plastic wrapper and Collector W has not intensively performed the revitalization, that's why the tea flavor was a little bit weak and not too vivid. That was due to lacking of time for revitalization. Fortunately, such performance was still within the expectation of tea connoisseurs joining the tea session.

The reason why the first Conscientious Prescription performed much vivid than the second one is that every occasion when Collector W taking out the first one for brewing was a chance of revitalization. From Photo A0798, the remaining 2/3 tea cake (the first one) implied that there were at least 10 to 15 times Collector W let the tea cake contact fresh air allowing the revitalization. By Cloud's experiences, the weak vividness of the second Conscientious Prescription can be ratified and the tea cake can absolutely become elegant again. As long as the tea owner let the tea cake contact fresh air regularly and properly (Cloud emphasizes, "properly" does not mean "excessively") allowing enough revitalization, the "sleepy" tea cake will be woken up and contribute its great and gorgeous Masterpiece Puerh Vintage tastes. 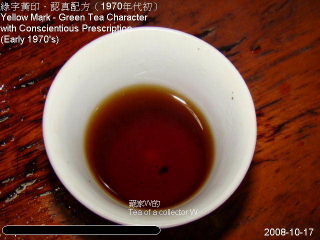 After several infusions (around 5 to 6), the second Conscientious Prescription became better and better. The tea flavor came back. There was improvement on the tea broth and vividness. The aged aroma contained soft and gentle mellowness. The vividness increased along the infusions. The tea broth was full of tea Qi. After having several sips of such, Cloud could feel the marvelous tea flavor from the exhalation.

After the 7th and 8th infusion, the tea broth was very close to the average performance. Around the 10th infusion, the thick tea broth maintained with sweetness, aging flavor and mellowness. The performance of the second Conscientious Prescription was almost identical to that of the first one. This proved that the weak output from the beginning was due to lacking of revitalization.

Many novices may ask, "Why is the 1970's Yellow Mark - Conscientious Prescription so attractive (or obsessional) for experienced tea connoisseurs?" The reason is simple. The 30 years tea cake provided gorgeous tea broth. How great is it? When you swallow the tea broth slowly and feel it wholeheartedly, you will discover the aged taste and aroma staying in your mouth for quite a long period of time with a mellow and comfortable sensation. That is very fascinating. It is truly a privilege drink.

Although the second Conscientious Prescription performed not so well at the very beginning, it started to revitalize along each infusion. This indicates that as long as the method and time for revitalization is appropriate, the "sleeping tea cake" can be "woken up".