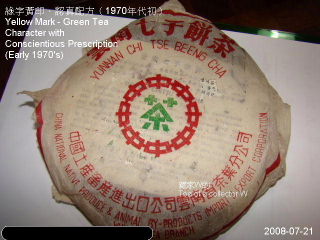 When tea connoisseurs refer to a good Puerh tea, a discussion on Masterpiece Puerh Vintages is a must, for example, the Red Mark Round Tea Cake and the Blue Mark Round Tea Cake, etc.. These are classic, good and well aged Puerh vintages well known to the market.

In 2008, it is extremely hard to have a change to appreciate and enjoy a single brew of these teas because there may be only a few pieces still being hoarded by collectors. As collectors are also tea connoisseurs who have to drink well aged tea almost every day, their aged tea stocks decrease with time. The Chinese wisdom "Brewed One Vanished One" was always mentioned by senior collectors in the past. That means aged Puerh vintages are not renewable. The tea cake which you have brewed will vanish forever.

Fortunately, collectors love to brew fascinating tea with other collectors in order to share experiences and views on different Puerh vintages.

Cloud is lucky. Last year, a collector A treated Cloud the 1950's Red Mark. Yesterday, 21 July 2008 (Monday), a collector W treated Cloud and other collectors the 1970's Yellow Mark - Green Tea Character with Conscientious Prescription (hereinafter refers as "Conscientious Prescription"), which is a genuine early 1970's vintage for our appreciation. The dry storage one, which offers an ultimate appreciation enjoyment, is the representative tea of the Yellow Mark series.

Yesterday, Cloud was late because Cloud had to finish the work before attending the tea meeting. Luckily, my lateness did not bother. Collectors were enjoying and discussing on some other teas. Then, collector W took out one of his collections for our appreciation, the gorgeous Conscientious Prescription.

In fact, there is a reason for the nomenclature. The earliest batch of Yunnan Seven-son Tea Cakes ordered by the China National Native Produce & Animal By-products Import & Export Corporation ("CNNP") were all printed with the green TEA characters. However, the green Tea character printed on the later batch manufactured in late 1970's (which is known as the "Small Yellow Mark") faded out and changed into yellow color (for details, please check "A Glossary of Chinese Puerh Tea" P.43 - P.45 & P.50). Since the tea cakes of this later batch with the yellow TEA characters were firstly available in the 1990's Puerh tea market and had a wide circulation for many years among tea connoisseurs and collectors, they named the later batch of tea cakes in the 1990's as the Small Yellow Marks (because of their smaller sizes) in accordance with their yellow TEA characters.

Collector W handed over the Conscientious Prescription to Cloud for chipping off an appropriate quantity for a nice brew. When we brewed the precious tea like this, Cloud had to make sure that the amount for this brew must be enough. Otherwise, the tea broth would have been mild and pale. This would have wasted the entire brew.

Yesterday, Cloud was lazy. The Conscientious Prescription was brewed by a senior tea collector so that Cloud could concentrate to prepare the tasting notes for the Cloud's Tea Diary. It was a good and well aged vintage worth putting down the notes. 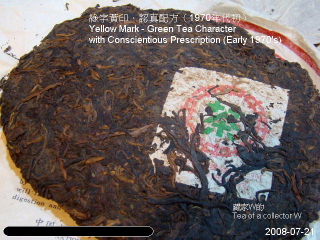 Amazing! That was really a well aged 1970's Conscientious Prescription. The aroma of rinsing tea broth had already been an attractive fragrance touching the nerves of one's brian. The soft and distinctive aged aroma could only be found in natually aged Puerh vintages. The special "camphor" aroma was the genuine aroma generally existing among the Masterpiece Puerh Vintages (P.S. "camphor" is only a word describing the aroma in Chinese, not necessarily means the true camphor taste. You may treat it as a special adjective to describe such distinctive aroma among Chinese tea connoisseur). It was not the so-called "camphor" aroma described by novices found in the wetly stored tea cakes. The tea broth released the aged "camphor" smell being full of aged tea characteristics. It was pure, mellow, elegant and soft. This is the reason why a tea cake with more than 30 years of aging is pricey because it could offer its attractive aroma and taste. It was absolutely fascinating and gorgeous.

The senior tea collector, who was responsible for brewing this precious tea, was ready to pour the crystal-like tea broth out from the teapot and distribute it into different private tea cups brought along with the collectors. Cloud brought two useful tea cup-like utensils ("tea cups") for my girl friend and myself. When the "tea cups" were used to appreciate the aroma, they grasped the fragrance firmly. When the "tea cups" were used for appreciating the tea broth, the edges of the "tea cups" would provide a good drinking angle for sliding the tea liquor smoothly into the mouth. In addition, when the tea broth was sliding into one's mouth, the opening of the "tea cups" were near to the nose so that the tea fragrance once again stimulated one's smell receptors. They were the perfect tools for appreciating well aged Puerh vintages.

It was not easy to describe the wonderful tastes with words and texts. The good way to feel it is to drink it yourself. That was a wonderful liquor with its soft, thick but sweet tea taste without any young and raw astringency. You know, it was truely a more than 30 years of age old tea. Most importantly, it bore rich aged taste in its vivid and not boring tea broth. When Cloud appreciated it sip by sip, I could feel the truthfulness of people manufacturing, making, preparing this tea 30 more years ago. Look at its absolutely gorgeous tea broth which was a clear, crystal-like, reddish brown vivid color but not dark. Even though the tea broth was contained in such "tea cups" with high walls, the bottom could be seen easily and this proved the well storage conditions.

When the Conscientious Prescription was brewed to its 5th, 6th and 7th infusions, the climax came. The taste was extraordinarily thick with sweetness. Needless to say that the tea Qi was overwhelminly dominating the entire infusions. Cloud could feel that its was a harmonious situation with very relaxing appreciating atmosphere. The whole body could feel the relaxation easily. In these infusions, the "camphor" aroma was obvious and released into the tea broth. The special "camphor" taste of Masterpiece Puerh Vintages dominated everything. This tea taste and aroma fascinated many tea collectors and connoisseurs causing them to pay a lot of money to exchange for these tastes and enjoyment.

After the delightful moment, the tea broth transformed into slight sweet and soft taste with not too evident aftertaste (Chinese: Hui Gan 回甘). Remember, the major reason to appreciate the well aged Puerh vintages like this was not to taste the strong aftertaste finish. Tea connoisseurs were aiming at the aged aromas and tastes which were the most fascinating part of well aged Puerh tea such as Masterpiece Puerh Vintages and Antique Puerh Vintages. When one was drinking these tea broth, as if it were an old man telling you the old history.

At this particular momment, when tea collectors were discussing on various topics, the 1970's Conscientious Prescription changed into another level. The tea broth started to become pale with light reddish brown color. The tea liquor became slightly mild but still with plentiful sweetness and vividness. Honestly speaking, it was a natual drink with more than 30 years of aging.

Believe it or not! Even though the tea broth started to become pale, the liquor was still thick. The tea broth after many infusions eventually became almost tasteless.