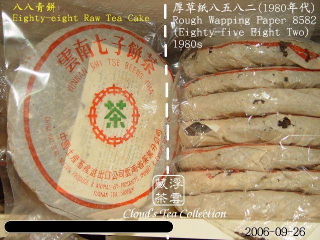 A Puerh tea lover, AY, asked, "How do I store the 1990's Puerh tea cakes? How about the newly made young tea cakes? Can they be stored together?"

If the teas are not exactly the same kind, they should be stored separately

This is again one of the basic principles of the Five Principles mentioned in "2009-08-29 Storage (1) - Principles & Cardboard Box", the fifth point - No odor.

The aroma of the old or aged tea cake by dry storage is what we called the aged aroma. If it is a wet storage Puerh tea, the aroma may be referred as aged earthy aroma (Chinese: 陳倉味). If it is a drily stored young tea cake without many years of aging, the fragrance of such is what we called raw and green aroma.

Obviously, you may notice that there are huge differences between the aromas of these Puerh, no matter whether they are dry, wet, aged or young. Although all of them are named as Puerh tea generally, their natures of aroma are very different. If they are stored together, their aromas will be "mixed" (or, in fact, contaminated) together. Generally speaking, the astringent green aroma of young raw Puerh is stronger than the gentle and elegant aged aroma. Thus, in most of situations, the aged tea cakes will be affected by the young raw astringent smell rather than the young raw tea cakes absorbing the well aged elegant aroma from the old tea cakes.

What tea lovers have to pay attention is that: Tea will absorb odor easily. Odor means the pleasant/unpleasant smell not being the original fragrance of the tea itself. In this situation, it is not the case as mentioned in "2009-08-29 Storage (1) - Principles & Cardboard Box" that the odor referring to the aromas of the ripe Puerh and the raw Puerh. It refers to the different aromas of old tea cakes and young raw tea cakes. In relation to aged tea cakes, the raw, green and astringent smell released from the young tea cakes is a kind of odor to the old tea cakes.

It is not difficult to understand. As long as the types of aroma are different, these Puerh tea cakes should be stored separately.

Photo A0051 clearly shows you how Cloud treated the aged tea cakes in my tea collections. In Photo A0051, one can notice that the Eighty-eight Raw Tea Cake and the 1980's Eighty-five Eight Two are separated by odor free plastic bags as they have totally different types of aroma. These plastic bags prevent their aromas diffusing from each other. 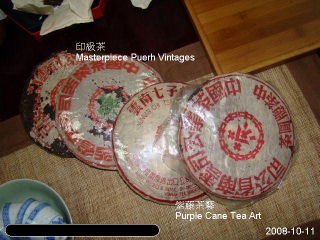 However, what if the raw tea cakes have reached their maturity (e.g. the Masterpiece Puerh Vintages, Aged Seven-son Tea Cake Vintages, etc.)? For these Puerh teas, there is no need for further great improvement on aging. How should we keep them? Shall we put them under the further quick aging environments? Or, shall we slow their aging process down so as to preserve their peak tastes?

For aged tea, tea connoisseurs will adopt the latter way treating their aged teas in order to prevent taste weakening. These well aged vintages should not further contact with air extensively.