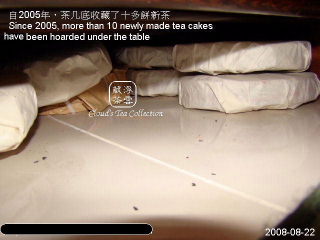 A Puerh tea lover, AY, asked, "If Puerh tea cakes are put under a table, can I switch on the air-conditioner in the room? I notice that some tea lovers using cardboard boxes to contain their Puerh teas for aging. What are the differences?"

Whether it is suitable for you to store Puerh tea at home depends on whether your storage environment fits the following requirements, i.e., the Five Principles. After understanding these principles thoroughly, storing Puerh teas at home will become easy:-

Temperature: 15°C ~ 30°C
Humidity: 60% ~ 80% (exposure to high humidity is not recommended)
Light: Not to expose under visible light (dark environment is preferable for aging)
Ventilation: Adequate
Storage Environment: No odour no matter whether it is pleasant or not

The above requirements are the best and ideal aging environmental conditions. If there are some deviations from these ideal ranges, will that affect the aging? Certainly, YES, it will, but it depends on the seriousness, i.e. the degree of effect. Will that be a serious effect or a minor effect?

For example, if the relative humidity rises to 85% and the tea cake is being put under this condition for quite a long period of time (say, half a year), then the possibility of molding is very high. This deviation will be a serious one. On the contrary, say in the winter, due to the natural climate changes, the relative humidity falls down to 53% (Photo A1077), what is the effect then? In fact, the effect is minor because the water contents absorbed by the tea cakes in the summer time will be extracted out natually (as the summer in Hong Kong usually has 80% relative humidity). Fortunately, the major effect will only be the fact that the aging process slows down. Then, the tea cake may need longer time to age.

When tea lovers understand the principles of storage, storing Puerh tea at home for aging is not too difficult. Of course, one of the majoy concerns will be whether the place or country of hoarding Puerh tea have such natual climates. That's why Cloud has to emphasize the natural climate of Hong Kong which is very suitable for aging (even though there is extremely high humidity sometimes in spring and summer in Hong Kong). Those well aged vintages were almost all being aged in Hong Kong. 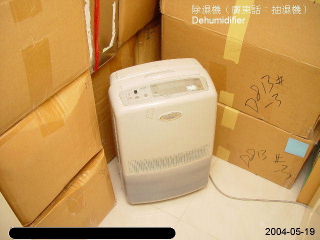 >If Puerh tea cakes are put under a table, can I switch on the air-conditioner in the room? I notice that some tea lovers using cardboard boxes to contain their Puerh teas for aging. What are the differences?

The tea cakes stored by Cloud under the table were, to certain extent, for the experimental purposes. For the same batch of tea, they were mainly stored in my Puerh tea cellar. The storage conditions remain quite stable within the cellar. Cloud will adjust the conditions from time to time, if necessary, in order to maintain the Five Principles. In fact, the Puerh tea cellar is an extra-large tea container which is full of attractive aged aroma.

In relation to the air-conditioning issue, the effect of such will depend on where the ventilator is. If the tea cakes are directly facing the ventilator, they will be cooled and warmed (after switching off) repeatedly in a day/month time. This will cause a great temperature fluctuation within a short period of time. That fluctuation is different from the gentle and natural temperature changes by 4 seasons. The great variation in temperature within a short period of time is already bad enough. The worse case is that the fluctuation may cause water droplets condensed on the tea cake itself which will definitely cause improper storage (For details: please refer to "How to Store Puerh Tea at Home (Part II)").

Since the tea cakes under the table locate at the sitting room, Cloud will sometimes switch on the air-conditioner. However, the cool air did not affect the tea cakes very much because 1. the ventilator is not directly next to the table; 2. Cloud didn't tell you clearly that there are funiture next to the table so that the tea cakes under the table cannot be cooled easily, especially it is a corner. Therefore, even though the air-conditioner was switched on sometimes, the aging environment there was relatively stable. Once the tea lovers udnerstand the Five Principles and apply them, tea can be stored easily. 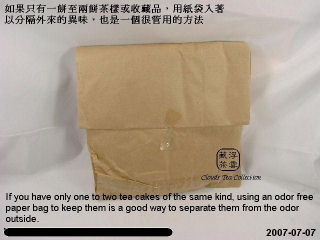 Cardboard box is an ideal tool for a long term tea storage. Apart from blocking the dampness and odor effectively, it is also a light-proof container for Puerh tea aging. However, how to apply and use a cardboard box is one of the storage techniques.

What tea lovers have to pay attention is that: Tea will absorb odor easily. Odor means the pleasant/unpleasant smell not being the original fragrance of the tea itself. Many tea lovers understand that tea cakes should be not hoarded in the kitchen in order to avoid the situation that it may be stained by messy flavor. However, many beginners do not know that there will be problems if they put raw tea cakes and ripe tea cakes together. The reason is that the strong flavor of ripe tea is a kind of odor to the raw tea cakes. If they are put together for a long period of time, the raw tea cakes will absorb the ripe tea smell, and vice versa. The taste will be a little weird and not pure enough. By the same token, since the flavor of wet storage Puerh is differnt from that of the dry stroage Puerh, they should be stored separately. At least, they should not be directly contact each other unless there is something in between such as cardboard. All in all, the same kind of tea cakes, tea bricks and bowl teas should be put together rather than to be put together with other kinds.

If a tea lover does not store too many tea cakes such as storing 1 to 2 cakes for each kind, independant odor free paper bag can be used for wrapping up the tea cakes before putting them all together into a large cardboard box for a long term storage. The way doing so is to cut off the major diffusion of their flavor and fragrance (Photo A0288).

By experiences, Puerh tea of the same kind is good to be stored together. The more you put together (the same kind), the better the aging quality will be. Since the aging prerequisites of the same batch of tea are identical (fragrances, flavors and tastes), it will be the most ideal way to fill all of them into a single cardboard box.

At last, Cloud would like to reply what the reader asked, "What are the differences?" The raw puerh tea put under the table will age faster because it can interact with more ventilated air without any deterrence by the cardboard box. However, the drawback will be less flavor and fragrance because too much ventilated air will cause losses to tastes as the aging pace may be too fast. Therefore, aging in cardboard box can keep more flavor but the time of aging will be longer.

On the other hand, the cardboard box is acting as if it were a house protecting the tea cakes inside and for better aging. The only shortage is that this will prolong the aging time. However, Cloud loves this method of storing tea because the same kind of tea cakes being put together in a single cardboard box will promote each other. Every time when Cloud opens a box to check their aging status, the thick and rich aged aroma will released from the tea. This is the greatest time.