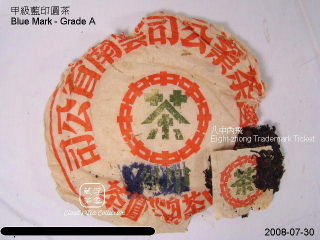 The Blue Mark of Collector T

Cloud was lucky again. Last year, a friend of mine, a Puerh tea collector, treated me appreciating the "1950's Red Mark. Just 2 months ago, another collector brewed the "1970's Conscientious Prescription - One of the Yellow Marks" with Cloud. Cloud appreciated a lot of good well aged Puerh vintages in a year time.

This month (September 2008), Cloud met another Collector T to taste some newly made 2008 raw tea cakes in order to research on their qualities. Among these very young tea cakes, they were from Yiwu, Banzhang and some other areas. Without doubt, after having a lot of these astringent raw teas, it was necessary for us to have a well aged Puerh vintage to balance our body's conditions.

However, there was no clue for Cloud to guess what kinds of well aged Puerh vintage had been bought along with Collector T. T took out a little pack of tea from the pocket. Cloud opened it and saw the dry tea leaves. Amazing! Although the dry tea leaves looked loosely compressed, Cloud knew that this was the result from a long aging time. It had reddish and shiny dry leaves, gorgeous! With the elegant mild special "camphor" aroma of the Masterpiece Puerh Vintages, it was a wonderful opportunity to appreciate such a good Puerh tea.

Even though it became an almost loose-leaf tea, some small chunks were still there. The recipe was good with different grades of tea leaves blending together with golden tea buds. It was drily stored so that it could offer a chestnut red tea broth. The pleasant "camphor" aroma could only be found in Masterpiece Puerh Vintages. Even though Collector T could not remember exactly what type of Masterpiece Puerh Vintage it was, by judging from the status of dry tea leaves and fragrance, ranking it as the Blue Mark was the bottom line of the judgment. That meant, by the characteristics it had, it must be an aged Puerh vintage with at least 40 years of aging.

By smelling the dry tea leaves, there was a mild "camphor" aroma of Masterpiece Puerh Vintage. It was a smooth silky texture. That reminded Cloud again about this memory which had been lost for a while.

The Aroma of The Blue Mark

Evident "camphor" aroma of Masterpiece Puerh Vintage was very attractive. It was soft, smooth and silky, especially the aged "plum" fragrance, impressive - wow! The tea broth was vivid, sweet and rich. Definitely, the mellow tea tastes of such kind could only be aged from raw tea cakes after many years. The tastes were also the ultimate tastes pursuing by many novices or even tea connoisseurs. Why do people store Puerh tea themselves? Obviously, they want to store the similar tea tastes without paying the time costs. Anyway, drinking several cups of such tea broth will give you a great relaxation and comfort.

The Tea Broth of The Blue Mark 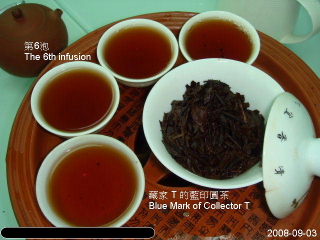 The candy-like sweet tea broth was soft and gentle. It gave comfortable feeling to your throat. Amazing! Gorgeous! Beautiful! The slight herbal taste was the unique offer of the tea broth of Masterpiece Puerh Vintages.

With its clear chestnut red tea broth, not yellow and green, it offered tea connoisseurs rich and thick aftertaste and finish. The clear and shiny tea broth indicated that it had been stored well. After the 10th infusion, the taste started to change into plentiful sweetness but still with its thick body texture. It was not watery. Well aged Puerh tea showcased all its meaningful tastes. This could not be valuated by money. It was invaluable to have an opportunity to have a nice brew of an aged tea with more than 40 years of aging. This moment - priceless.

After the 20th infusion, the sweet tea broth also started to change into mild tea aftertaste. However, there was still a certain degree of sweetness. That was really a wonderful Masterpiece Puerh Vintage. Nothing to say.