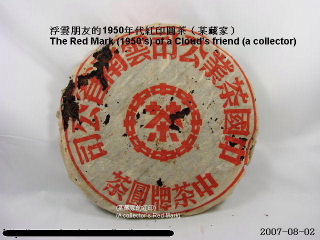 In a peaceful afternoon, cloud was busy with his work. Mobile phone rang. It was a call from a Puerh collector, a friend of cloud, just name he/she as A. A said, "Not having met you for a long time, how about having tea together tonight?" "Sure, why not?" Cloud was very happy because A has a lot of good and well aged Puerh vintages, and importantly, A has more Puerh vintages than Cloud. A asked, "How about bringing the Red Mark with me? Is that ok? I think having the Red Mark and chatting will be fine." Cloud replied calmly, "As you wish!". Then, a mini Red Mark meeting was settled. 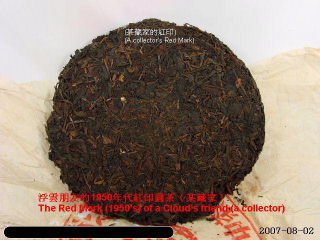 My friend's Red Mark is the best Red Mark Round Tea Cake that I have tasted even since. It is remarkable and unforgettable. Even though you may have got a lot of money to buy a piece, the one you buy may not be the best quality because the quality really depends on storage conditions. My friend A, a collector, knew buying dryly and naturally stored Red Mark, which is so elegant, by paying more money is a smart decision. The Qi of this Red Mark is great. Most importantly, A does not like to save tea leaves when having Puerh vintages no matter how expensive of its market value. The rationale is that if tea leaves are too little, there will be not enough taste and the liquor and flavor will not be rich enough. This will ruin the entire brewing. That means all or nothing, either drink (must have enough tea leaves) or not to drink. Of course, A's Red Mark would be chipped off by Cloud. The amount of tea leaves would not be an issue any more.

&nbspHaving seen my friend, A, I started with a short conversation. In fact, the Red Mark was the major role. When the Red Mark was in my hand, the slight "camphor" aroma from the tea cake was absolutely fascinating. This Red Mark is still alive and having quite strong tea Qi. That is the reason why this kind of Red Mark Round Tea Cake with such extremely good storage condition could cost a connoisseur to pay US$10,000 (No typo, really ten thousand bucks!) to purchase one piece. However, the dreadful situation is that even though you are willing to pay, it is difficult for you to locate one (I mean a good one) because these kinds of Red Mark are all kept by rich collectors who do not have any financial pressure. Why should they let these Masterpiece Puerh Vintage to be drank by others? 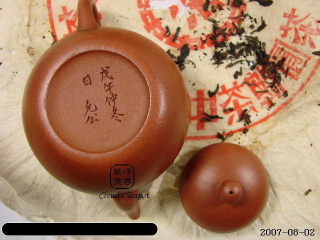 &nbspAnyway, Cloud provided also a not bad old purple clay teapot hopping that this one could match and assist the Red Mark showcase its wonderful liquor.

&nbspHaving decided the right corner to be chipped off, I used the stainless steel letter opener to start the procedures. Since the Red Mark is my friend's, I dared not break a large piece. Oh! I have got a little piece chipped off. Let's weigh it, 10g. Mmm… Great! I thought that was enough because 10g is my standard weight for brewing other Puerh. Unfortunately, putting this 10g into my slightly large teapot seemed that the content was not enough. Don't worry, my friend would not mind. Then, I chipped off more. This time, 14.5g. Enough, really enough. You can see how full it was in my teapot from the photos. Yeah! 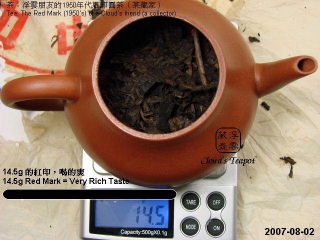 &nbspUsing 14.5g Red Mark to brew was really gorgeous and absolutely amazing. Another important factor making this mini tea meeting fascinating was that only A, Cloud and Cloud's girlfriend were the parties. We could have a large "sip" in every infusion, extremely delectable. In the process of breaking a tiny piece from the Red Mark, an aged yellowish tea leaf was discovered in it. Therefore, I don't really understand sometimes when some beginners are very concerned about these kinds of yellowish tea leaves in their young tea cakes. You see, even though the Red Mark has some.

&nbspNext…prepare the water and boil the water.

&nbspCertainly, it was not ethical if I would have always focused on the Red Mark. I must have a nice chat with A, my friend, who brought me the delectable Red Mark.

&nbspIn the rinsing section, the aged aroma of the Masterpiece Puerh Vintage emerged. That was a great enjoyment of having that kind of aged aroma. Although it was only a rinse, the Red Mark had already offered its first round slight "camphor" smell accompanying by a slight herbal smell. In addition, this Red Mark was a dryly stored one, so it also had an aged slight plum aroma (restricted to dryly stored one). That's why I said this Red Mark was absolutely fascinating, even thought it was just the rinsing infusion.

&nbspAfter rinsing, boil the water again although it was already nine at night. 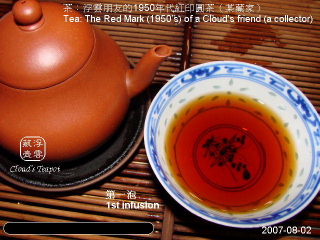 &nbspThe color of the liquor changed from the light reddish brown (of the rinsing) to darker reddish brown (see the photos, more clear). This was a very beautiful and gorgeous tea broth. Having such color, the Red Mark is the one, ultimate pursuance of Puerh connoisseurs. Absolutely reddish clear tea broth offered you a plum and "camphor" taste. The mouth seemed to be never dry even though we chatted a lot. Obviously herbal flavor was outstanding but not too much. And the tea broth was smooth and rich, needless to say. The entire combination occupied our months. The tea broth was not strong. It was mellow and soft. After drinking the liquor, whole of our months were filled with this Red Mark taste. Fascinating, nothing to say.

&nbspBoil the water again, not to hurry because we were enjoying the Red Mark.

&nbsp2nd infusion, Qi started to emerge. Therefore, we enjoyed and enjoyed. Sorry … let us enjoy and no more notes. 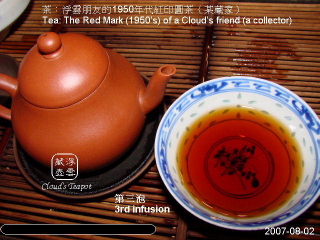 &nbspThe liquor went further reddish brown with its clear status. There was not even a moment the Red Mark giving you an unclear tea broth. You can see from the photos that the tea broth was crystal clear as if it were a ruby. That's why I said, I always miss my friend (and A's tea vintages). The Qi went stronger. I could feel the Qi starting from my back to my head. The aged plum flavor was great enough. The tea broth was also vivid enough. However, the stronger herbal smell was not over to cover up the real flavor of the Red Mark. Although the taste of this infusion was close to the 1st and 2nd rounds, the taste started to get richer and richer because the tea leaves of Red Mark was spreading. The apparent "camphor" smell from the surface of the liquor was getting richer and stronger. That was enticing and supreme. As I said, that was ultimate pursuance of Puerh vintages. However, at this moment, my friend A and I agreed that although the tea broth was mellow enough, if we tasted the liquor seriously, we could still feel the slight "astringency" because it was aged from the raw tea leaves. However, I must emphasize that this "astringency" was not the same as that astringency of those young raw Puerh. This "astringency" was already soft and aged. That may explain why aged Puerh vintages are still vivid and fascinating even though it is already more than 50 years of age.

&nbspNo more prepared water, go and get some more, and then boil.

&nbsp4th infusion, similar taste with the 3rd infusion, we just enjoyed and no tasting note please. 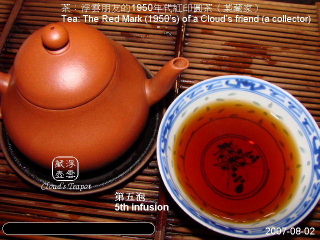 &nbspThe Red Mark came to alive. It was truly the Red Mark, the best Red Mark. Strong and obvious but mellow plum "camphor" flavor came from the liquor together with the not too strong herbal smell and taste. The Qi ran though the entire body, which made everybody felt good. The body got warm and heat. Even though we were drinking tea in air-conditioned room, we still had a slight sweating. The hot Qi was shopping around the body. We were extremely relaxing and having a loose concentration.

&nbspHaving that large "sip" of the Red Mark, we all want to chat and discuss and no more further liquor because we wanted to keep the moment until it faded out. Therefore, we were just walking around and taking a break. Yes, we needed to take a break.

&nbspAfter the short break, getting to toilet. Boil water again. 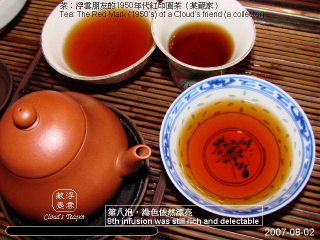 &nbspThe liquor still maintained its crystal clear reddish brown color as if it were ruby. However, it changed here. The herbal taste was still here, but the aged plum "camphor" taste transformed into the slight "camphor" taste. Beside, starting from this round, I would like to use a phrase "Ripe Fruit" taste to describe this special taste. The tea broth became sweet and having a taste like the "Ripe Fruit". But this "Ripe Fruit" taste was not too strong, it justified everything which led the entire flavor to another level of sweetness and vividness.

&nbspYou can see from the photos that the tea broth was still very crystal clear reddish although it was slightly lighter than that of the 5th infusion. But this was absolutely gorgeous when it came to the 8th infusion. In this round, the "Ripe Fruit" taste was getting obvious because the plum "camphor" taste was starting to fade out and the slight "camphor" taste was coming up. I would say this was another level of Red Mark. It was really difficult to put all these down by words. It'd better to try this yourself. 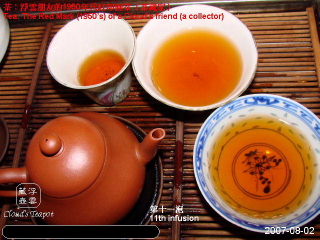 &nbsp9th and 10th infusion, more or less the same as the 8th infusion. Just enjoy and no need to spend time on note taking.

&nbspThe "Ripe Fruit" taste, the slight "camphor" taste and the sweet liquor were getting down. This implied that the Red Mark had done its historical mission. Also, it was worth noting that it was already 1:00 in the midnight. We appreciated this tea for more than 3 hours with just a single Red Mark brewing. This was absolutely enjoying and fascinating. My friend, A, needed to go back with A's Red Mark.

&nbsp12th infusion to 20th infusion, I enjoyed it on the following day.

&nbspHow about the brewed tea leaves? Surely, I would take some pictures for you to look at. Here they are, tea leaves of great Masterpiece Puerh Vintage.

&nbspThank you A, a friend of mine.