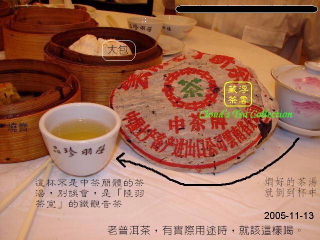 Tea is the national drink of China. Chinese people love to drink tea. This passion can be divided into two categories. One is on the level for living necessity. A Chinese doggerel says, "Firewood, Rice, Oil, Salt, Sauce, Vinegar and Tea" (柴米油鹽醬醋茶) which are all the necessities of standard living. Tea being the last necessity serves the practical purpose for clearing the fat after dinner. Another level of tea is the "Art of Tea". That means to appreciate tea as the major purpose of having tea. However, it is weird that on the art level of Chinese culture there was not much attention to the art of tea as another Chinese doggerel says, "Zither, Chess, Book, Painting, Poem, Wine and Flower" (琴棋書畫詩酒花). However, there is no tea listed at all.

It has been a very long time and history for tea infusing into the life of Chinese people. Whenever there are guests, Chinese people serve cups of tea to show kindness. For those minority nationalities living near the frontier of China, they have the same courtesy to serve all their guests. It is very simple that tea is part of their life, but not an "Art of Tea". Tea is not the main body to be appreciated. Serving tea is the means to show their courtesies to their guests.

By the same token, "Drinking Tea" in the dialect of Guangdong people also refers to the tea brewed for living necessity. Every time Guangdong people meet someone they know, they will have words, "Let's have some tea some days." It does not really mean that Guangdong people are series to have that cup of tea. "Tea" in that sense is just a simple word implying meeting and chatting with friends in near future's occasions. If they meet in a Guangdong restaurant serving dim sum, the main body will be the dim sum themselves rather than the tea they mentioned. Whether the tea serving by the restaurant is acceptable or not is not a real issue.

In the art culture in traditional China, it seems that the art of wine is more popular than the art of tea. Whenever a Chinese poet wanted to write a good poem, he will be accompanied by a cup of wine rather than a cup of tea. Our ancient poet who was also a tea lover, Su Shi (蘇軾), wrote his "Shui Diao Ge Tou" (水調歌頭) poem with wine rather than tea, he wrote, "When do I see the moon? I have to ask the sky with wine". Why was there no tea? This might be due to the fact that tea could clear up one's mind so that he might not have such mood to write such a great poem. Surely, there are still some poems describing the art of tea. For example, in the poetry of Lu Tong's (盧仝) having a poem nicknamed "Seven Bowls of Tea" is the representative. 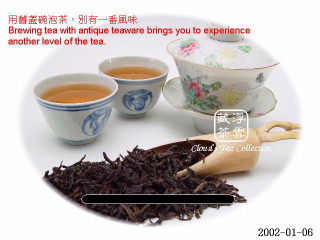 In order to promote tea from the necessity of living to the art level, being the main body of appreciation, the first step is to educate people to pay more attention to their cups of tea. Let's go through the Chinese doggerels again: "Firewood, Rice, Oil, Salt, Sauce, Vinegar and Tea" and "Zither, Chess, Book, Painting, Poem, Wine and Flower". The stuff mentioned in the former doggerel is necessity with practicality. If these stuff are promoted to the art level, do you mean there are also "Art of Firewood", "Art of Rice", "Art of Oil", "Art of Salt" and "Art of Sauce"? Let's look at the latter doggerel, every item mentioned therein is related to cultural arts pursuing the spirituality. They are invented for the purpose of amusement. Therefore, it seems that anything without internal spirit cannot be promoted to the level of art.

Some tea masters wrote out the concise natural of tea. TEA can be drunk or appreciated. Tea becomes a very special kind then. It can be the living necessity of people; it can also be the body of art being appreciated and discussed by educated people.

What inspiring me to write down this short article about the relationship between tea and the spirituality of humanism is the contemporary contest of tea. By the nature of tea, it is beautiful and harmony. It is also an art for common appreciation between people. However, when tea is promoted to the level of art, people start to pay attention to its quality. At least, it cannot be water alike, tasteless. Therefore, it must involve quality. Once quality is involved, there will be high and low. Gradually and unavoidably, the element of business will be merged into the tea. Tea itself will because "unclear" and evolves to "which tea is better, yours or mind?"; "whether you or I have got a more aged Puerh tea?"; "Whether your oolong tea or my oolong tea is from a higher elevation"? Then, tea comes a contest of quality, aging years and elevation. Is this the "Art of Tea"?

In fact, different teas fit different people. If somebody is forced to accept other's tastes and views on tea, I think it is no help to the development of tea. Actually, there is no conflict for those who loves oolong tea to respect Puerh, or vice versa. Oolong tea and Puerh are actually two different kinds of tea. Is it right to make a simple comparison between them? Why is it so difficult to give respect between oolong and Puerh (it is the same for old vs. young Puerh)? Chinese people always talk about "Acceptance". Is there really a best tea in the world? The rationale behind the contest between the oolong and Puerh (or different kinds of Puerh) is obviously the market shares. Money, Money and Money. Why has fake additional aging year(s) been added to Puerh? Same answer, MONEY is the offender.

TEA, is supposed to be a media to connect people. Whenever you have friends who live far away from you to see you, you will treat them good, right? Cups of water? Biscuits? Nice dinners? Chinese people always brew cups of good tea to their friends. However, if tea becomes the main body in a tea contest, it can be imagined that the atmosphere can be bad. This is not the true nature of tea. Tea should serve as a good media to put people closer, not to separate people far away from each other. To find out the reason, it is the nasty business attitude. Sometimes, unethical businessmen twisting the truth are to conceal their crap or to degrade other's good products. These unscrupulous traders always love to give incorrect information to fool the customers. Unfortunately, this will result in the situation that customer A argues furiously with customer B over the same tea however they are not on the same page because of their incorrect information being told by the irresponsible traders. However, the customers will stay away from them eventually because they will know the truth one day, just as a matter of time. But, let's think further a bit, the furious argument over the quality of tea is just a joke because it is the pot calling the kettle black.

Chinese people always say, "simple meal with ordinary tea" to mean "simple life". Therefore, tea gives Chinese people an impression that it is simple and unsophisticated. In the 1990's, there was a funny local song with lyrics, (translation) "You plant your flower and I plant my flower, will there be any difference?" Therefore, I am of the view that oolong tea, green tea and Puerh tea are teas without any conflicts by themselves. Confrontation comes from people.

TEA is gorgeous and elegant itself, why is there often a confrontation?