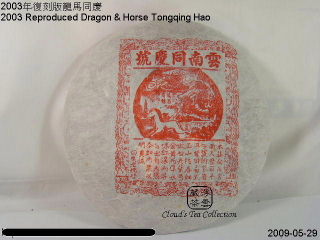 Apart from collecting traditional Zhongcha Brand Seven-son Tea Cakes, i.e. those Aged Seven-son Tea Cakes with at least 20 to 30 years of age, Cloud also collected some Non-zhongcha Brand tea cakes with good aging potential. Even though the tea cakes are from small factories or without any celebrity, it can still offer a good sensation and aftertaste after many years of aging as long as they are compressed from good tea leaves with great aging potential.

In 2004, Cloud collected a stack of 2003 Reproduced Dragon & Horse Tongqing Hao. What attracted Cloud were its thick and soft tea cake (not too compressed) with many intact tea leaves. Besides, it offered a great thick tea broth at the first time when Cloud tasted it. After 6 years of aging, it shows an amber color in the tea broth. Cloud remembered that it was just a light yellowish liquor when Cloud had it 6 years ago.

What a coincidence! Cloud found from the photo database that this tea cake was taken photos at the beginning of 2004 and at the middle of 2007. These historical photos can show how the same tea cake age by these years. The tea cake's color has been changing from time to time. The photos can show how it looked like at the 1st, the 4th and the 6th years of aging. The change is obvious that one can notice from viewing the back of the tea cake (Photo: A1138 and A1141). One can see that the fresh tea buds with the almost white color has been aged naturally into golden color.

From the color of present tea broth, the aging process of 2003 Reproduced Dragon & Horse Tongqing Hao is well expected.

Tea Broth and After Taste

Boiled water gave life to the tea and woke it up. It gave soft, pleasant and smooth aroma which was elegant and gorgeous. The tea broth was thick, plentiful sensation with sweetness. After having the tea broth into the stomach, one could feel the gentle but great aftertaste stating in the mouth for further enjoyment. In the liquor, one would notice a little bit bitterness which was a good sign for further 10 years of aging.

All these performances were the good signs implying this tea had potential to age in the next 10 and 20 years. Cloud believed that it would offer another great aged taste in the next 10 years. Then, Cloud will be enjoying its semi-aged taste luxuriantly at that time with its inexpensive purchasing cost (without including its storing and time cost).

Although one may need to wait for another 10 years for the expected aged taste of 2003 Reproduced Dragon & Horse Tongqing Hao, the present taste of such is already great enough. Of course, Cloud is expecting its great aged taste when it ages at the 10th or the 15th years of age. This is the reason why people want to store their own tea cakes. The purpose is to drink them in the future when it is great to be appreciated.