Is Aroma a Useful Index of Ripening?

An Internet Puerh tea lover posted a question to a discussion forum. The scenario is as follow:

"I'm running a risky experiment: exposing about three dozen of my best (?) new sheng cakes to quasi-wet storage in hope of accelerating their maturation. I've loaded them into a couple of plastic file boxes that close but don't seal, and left them on a sunny enclosed porch where summer temperatures top 100F. In each box, I've put a glass half-full of water and lined with a coffee filter to increase evaporative surface. Humidity is monitored via ultra-precision hygrometer, $4 from a cigar store. (I did calibrate it to 100%RH.)

Presumably due to air exchange, RH seems to hold around 80%. No hint of mold or any such.

The main observable result of extra warmth and moisture is a dramatic increase in aroma. I'd be interested to know why - mobilization of organics from the leaf matrix, accelerated chemical or microbial action, or what?

In any event, it is striking how *raw* the smell is. Not unpleasant, but raw. I'm one who assesses both fruit ripeness and progress of food cooking by nose. So I'm wondering: will it be obvious from the aroma when Pu'erh ripening has made some progress? Some people here are holding a sufficient quantity and age range of cakes to comment. Is aroma a useful index of ripening?

Yes, aroma is one of the indexes, but not the most useful one.

Cloud is not a scientist. Cloud doesn't know the mechanism of how it changes internally. But, by experience, the climate of Hong Kong is suitable for Puerh tea aging. Cloud just keeps them in the relative humidity from 60% to 85% which is the natural climate changes during four seasons. 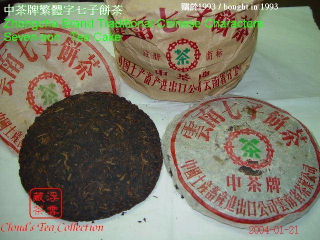 >Will it be obvious from the aroma when Puerh ripening has made some progress?

I can say, YES. But it will only show you the noticeable aroma when the interval of years of aging is large enough.

In other words, the aroma of young tea cakes from 2006 and 2007 will be so similar that they are almost idential (subject to the condition that they are blended with similar raw materials. Different raw materials have different dry tea leaf aromas). The tea does change, but quite subtle. If a young tea cake has been aged for 7 to 8 years, the araoms of such should be noticeably different from the aroma when it was 2 years. That means it has made some progress. The progress takes a long period of time.

Unless you quicken the process such as exposing it to high humidity (like what you did in your experiment), the change in aroma will not be noticeable within, say, 5 - 6 years.

>Is aroma a useful index of ripening?

Yes, aroma is one of the indexes, but not the most useful one. It is not too indicative if lacking of experiences.

For example, the above tea cake has been hoarded by me since 1993 (Photo A0001). Cloud remembered that it had the following changes in aromas:

The followings are also some other references for determination:-


As you can see from my Cloud's Tea Collection - Private Tea Album, there are photos of different aged Puerh tea. The colors of their brewed tea leaves were different. When Cloud posted more brewed tea leaves later, Cloud will sort them into an organized format. Then, you will know why tea connoisseurs can tell from the photos about the relative years of aging.