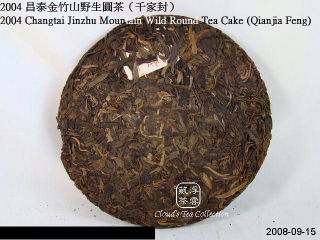 Today was a public holiday following the 2008 Chinese Mid-autumn Festival. Cloud had time to write a Cloud's tea diary.

When Cloud posted the 2004 Changtai Jinzhu Mountain Wild Round Tea Cakes (Qianjia Feng) which were the tea cakes hoarded under the table (See: 2008-08-22 Water Leakage - Nearly Damaged Good Tea Cakes Under Table), some tea lovers were very interested in knowing more about the tea quality after 3 years of aging since they had been put under the table. As Cloud did not post any naked tea cakes of such previously, the quality was still a mystery last month. Therefore, it was the right time to open up the wrapper, brew a session and write a short note on it during the holiday.

Time went by quickly. These tea cakes had been stored there for 3 years. What would be the result? Of course, as Cloud expected, they were perfectly good.

The fragrance of the dry tea cake was still fresh with slight honey aroma. It was vivid, pleasant and quite refreshing. Pouring the hot water into the tea bowl, one will notice the aroma was slightly different from that of the dry tea cake. It was a clear, soft, sweet and slight aged smell. The pleasant aroma became very obvious when one focused on the center of the tea bowl's lid.

It was a light amber color which reflected the normal aging condition of a raw tea cake with several years of aging. It showed that it was not exposed to excessive humidity. The clear tea broth also told that it had been aged in a stable environment without going wrong.

The smooth, soft and rich tea broth was the soul. When Cloud paid extra attention to the tastes, a very special and palatable mountain sensation was found in the tea broth. Perhaps, it was the specialty of this tea, the taste of the tea from Jinzhu Mountain. Although some suggested that this tea carried Yiwu taste, Cloud did not think so.

Anyway, the evident sweet taste of the tea broth was one of the major characteristics. In addition, the thick and rich liquor was also an affirmative performance. After nearly 4 years of aging, it showcased its potential and aging ability.