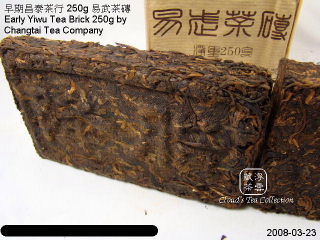 Today, Cloud noticed that a Puerh tea lover posted a thread to his Yahoo! BLOG (Chinese only) and another Chinese Puerh discussion forum that he reviewed the 2001 Yunnan Yiwu Tea Brick he bought at that time. His final comments were that, he said, "After 7 years of aging, it only gives me a dry and uncomfortable aftertaste which was quite unacceptable. After tasting 3 infusions, it was thrown away."

Was the tea really bad? Cloud was surprised to read the comment over the Internet. He said, the taste of the tea broth was near to the ripe tea. However, it should be and always be a raw tea brick. How could it be a ripe tea brick? Furthermore, in my impression, it was an elegant raw tea with stylish and silky tastes. Why did the tea lover give the ripe taste comments? It seems that the answer is related to the storage problem.

Cloud's comments replying to the post were posted there in Chinese. What Cloud is trying to do in this post is to put down the current tastes of this tea which has been hoarded by Cloud for many years. It is a naturally aged tea brick being hoarded by Cloud for 7 years. The tea brick was shiny and attractive.

Cloud bought this Yunnan Yiwu Tea Brick in Mainland in 2001. There should not be any dispute to its years of aging. Perhaps, the only dispute to the tea could only be the allegation that the tea leaves being compressed were from 2000. Anyway, the unconfirmed thought should be made for reference only. Cloud would adopt a more conservative estimation, 2001.

The aroma of this tea was soft and deep. It was attractive and there was no resistance to drinkers. As it was stored by Cloud in the past 7 years properly, there wasn't any unpleasant aroma, absolutely free from any earthy smell. The fragrance was clear, fresh and elegant.

The tea broth of the 2001 Yunnan Yiwu Tea Brick is light amber. Cloud remembered that the color of the tea broth was only light yellow when it was young. However, the color changed today. It was not surprising because it has been aging for 7 years.

The change of tea broth color implied that the taste of the tea also changed (towards the good direction) in terms of its aroma and taste. One could easily feel the special taste of this 7 years Yiwu tea. That taste forecasted the aged tastes of many young Yiwu tea cakes.

The tea broth was thick, not thin, sweet liquor with less astringency. That was a soft style of Yiwu tea, but rich in tastes, deep and long-lasting. It was an easy taste to be accepted for many beginners. On the contrary, the traditional raw Puerh from the same year is still quite astringent.

By exhaling gently, Cloud could feel and sense the soft Yiwu feedback of the tea broth from this 2001 Yunnan Yiwu Tea Brick. The sweet air flow came from inside to outside through the nasal cavity touching the nerve cells. Wow! Unbelievably good. It is easy to recognize the Yiwu taste as long as you drink more Yiwu tea. Deep and soft tea taste is one of the major characteristics of Yiwu tea.

Although it is still a young tea with less than 10 years of aging, it is already a good tea worth waiting for. The Yiwu raw tea leaf materials used in this tea brick was good.