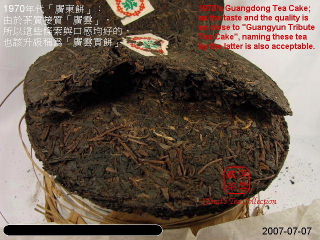 Just before the time getting off from work, the authority of the Hong Kong Observatory issued the Tropical Cyclone Warning Signals No.1 (which is a stand-by signal indicating that a tropical cyclone is centered within about 800 km of Hong Kong and may affect the territory).

Certainly, Cloud immediately clicked to the website of the Hong Kong Observatory to check the path forecast. The severe tropical storm was named as "NURI" and it would be very close to Hong Kong in the following day. That meant there would be an unexpected holiday. However, the day before the storm came was so calm and silent. Cloud did not have to worry too much about the weather at that night and it was a good opportunity to appreciate a nice aged tea as Cloud did not need to go to bed too early. Cloud could write something down for the Cloud's Tea Diary.

After the casual dinner, with the expected extra-holiday (i.e. no need to go to work tomorrow), it was a good idea to brew an aged Puerh tea and appreciate each infusion with heart. It had been a long time for Cloud not being so relaxed to brew an aged tea (half a year ago, Cloud was writing the book, A Glossary of Chinese Puerh Tea).

A little round bamboo basket was always put next to the tea brewing table for temporarily containing the recent brewed tea. Some of them were just brewed several days ago so that they were right on the top of the pile. Nevertheless, some of them were brewed several months ago and Cloud had to dig into the pile for them.

Where? Where? Where? Along the digging, Cloud could not locate any tea older than 30 years. As Cloud remembered, there was a 1970's Guangdong Tea Cake there. Finally, I got it.

Although the Guangdong Tea Cake is not a very renowned tea cake, it is still a genuine tea cake with more than 30 years of aging. When the fragrance was released from the rinsing infusion, the evident mellow and aged aroma conquered the soul, mind and body. It was so attractive. The tea broth of the 1970's Guangdong Tea Cake was clear and shiny with lovely chestnut red (photo A303). It was vivid, alive and outstanding. Its finish and aftertaste were plentiful. That's why people say, "Puerh tea is a drinkable antique."

Waiting for a while for the tea broth cooling down a little bit and drinking it conscientiously, one would notice that such an aged tea broth could be given by time. Even though the tea broth was not thick enough, its sweetness overwhelmingly dominated the entire feeling and mood. The sweetness was very long-lasting. Even though the tea broth was now in the stomach, the nice sweet aroma would stimulate the nasal smelling receiptors again when breathing out. That was amazing, in particular, the aged aroma and tea tastes which were mellow and smooth. It was a difficulty to say "NO" for the next sip. It seemed that there were still a lot of room for some more infusions.

Generally speaking, the Guangdong Tea Cake was not as long-lasting as the Masterpiece Puerh Vintage produced in the same era. However, it would still be a good tea when it provided at least 12 infusions. If one did not mind the mild tea broth, it could last for at least 15 infusions. That was pretty nice.

The wind speeded up outside while the taste of the tea became pale. These formed an obvious contradiction. One was mild indoors while another one was fierce outdoors.