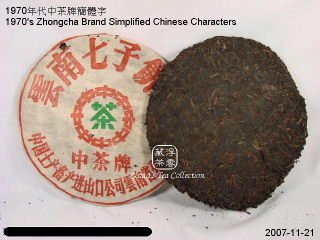 Cloud has been posting threads and articles in many discussion forums for many years. Some tea lovers living out of Hong Kong would like to sit down and brew some nice teas with Cloud when they visit Hong Kong. Certainly, we can share our views on the same tea instantly which is more direct and precise.

Yesterday (13 Aug 2008, Wednesday), a tea lover from Mainland China came to Hong Kong for fun. He took his family to the famous theme park, the Ocean Park. He then joined Cloud to brew some nice teas. Since it was a weekday and Cloud got off from work after 6:00pm. There was not enough time for tasting some new teas and did tea reviews as the tea house would close at 8:00pm. Therefore, brewing the 1970's Zhongcha Brand Simplified Chinese Characters Seven-son Tea Cake ("Simplified Characters") was the best choice. It was truly the representative of the well aged Puerh tea vintage.

The Simplified Characters we brewed was the one as shown above. It was firstly chipped off in the early 2008. However, there was only 1/3 left yesterday. Friends and Cloud drank a lot from this disc of tea. No matter how much it left, enjoying the tea was the most important issue.

At the time when the water was still boiling, checking and appreciating the status of the tea cake was one of the usual etiquette of tea meeting. It was a nice and well aged Simplified Characters. Without any tool, it was very easy for Cloud to chip off a bit by hand because the compression pressure would release through time.

Cloud has brewed and drunk many Simplified Characters these years and can conclude that not every Simplified Characters was having good tastes because of different aging conditions. Every well aged tea cake is subject to the aging process and environment. It is a matter of luck to have a disc of good aged Puerh vintage with gorgeous aromas and tastes. 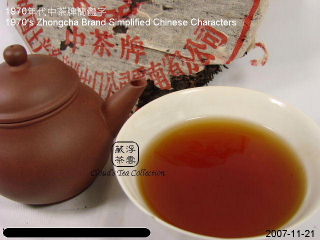 The 1970's Simplified Characters has been well aged. When hot water was poured into the tea leaves, it released the gentle and aged aroma as if it were a fair lady. The light and sweet fragrance filled up the entire lid of the tea bowl. The soft aroma touched my heart and soul. It was a perfect brew for relaxation after work. It would drive away all the troubles temporarily. It was a moment of peace.

Chestnut red tea broth with its clear, mellow and shiny liquor showed how old it was. Without enough time for aging, there couldn't be such performance. The warm tea broth swung all around in Cloud's mouth feeling its soft, silky, mellow and sweet tea tastes. The astringency of raw tea cake had been aged into the mellow sweet aftertaste and finish. It was no need to mention, the aged aroma and taste were a must. Nothing to say, it was absolutely gorgeous. Even though it has been aging for more than 30 years, there was still a very little raw astringency which contributed to its round and vivid aftertaste. This provided the layers of taste and the richness of tea broth.

The specialty of the 1970's Simplified Characters was that it carried a round, full and candy-like mature fruit aroma. Somehow, it was like a floral sweetness. Amazing! The tea cakes produced from the old days carried rich tea broth and aftertaste. Although it took a very long period of time to age, it could offer long-lasting infusions and good tastes. It was worth waiting for. After the 20th infusions, it could still offer many subsequent good infusions. 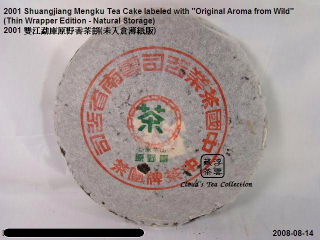 Accidentally, the tea house had the sample of the 2001 Shuangjiang Mengku. It was convenient for us to brew it together to form the views so as to judge on the representation. Maybe, the sample tea was stored in Hong Kong. The tea had changed. Although the astringency was still there after 7 years of aging, it was perfectly normal. It was the same from the Simplified Characters we had a moment before that there was still a very mild raw astringency even though it had already been aging for over 30 years. Therefore, it was perfectly acceptable for the 2001 Shuangjiang Mengku still having its astringent jerkiness.

Because of this discussion, it drove Cloud to put down the tea review of 2001 Shuangjiang Mengku Tea Cake labeled with "Original Aroma from Wild" as a 2008 tea record for future reference. If you are interested to read this long article, you may visit the Cloud's Tea Collection - Internet Articles and click "2008-08-22 Landmark 2001 Shuangjiang Mengku" on the left menu.