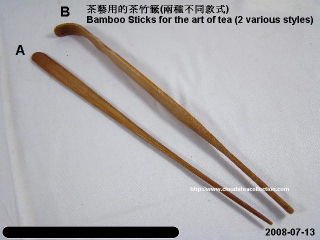 Prying apart the leaves in the first infusion?

Further to the post on 2008-07-09 Brewing Technique - Proportion of Tea Leaves, one of the tea lovers asked Cloud, "Instead of including the broken leaves, why not just pry apart the whole leaves once they are softened by the first infusion?"

Cloud had seen some people treating the tea leaves in the similar way, prying apart the tea leaves with an elegant bamboo stick (as shown in the photo) in the first rinse. They just stirred the rinsing tea broth together with the tea leaves being still stuck together so as to pry apart them.

Brewing tea is an Art and Performance

Imagine you are brewing tea before people, there are eyes watching you how you treat the tea and tea broth they are going to drink.

Certainly, after prying apart the tea leaves, you may rinse the tea leaves again with boiled water as the second rinse so as to make sure the contamination is removed.

On the other hand, if you do not intend to use any tools to help on this issue, can you just shake the tea bowl or teapot to pry apart the tea leaves? If yes, would the shaking need to be violent? You may do that when you are brewing tea for yourself. If there are people sitting in front of you waiting for your tea broth, would that be a little bit embarrassment?

Therefore, Cloud suggests the idea that adding 30% (or any other proportion) broken tea leaves with the intact leaves would be good enough to release the tea essence in the first few infusions. 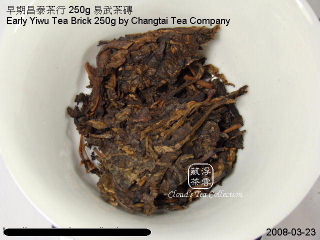 No intervnetion is an advantage

The tea lover further asked, "is there an advantage to letting the compressed bit unfurl without any intervention?" Cloud would like to comment on this in the practical sense.

Yes, I do take the view that letting the compressed bit unfurl with boiled water and without any intervention is advantageous. When you use 30% broken tea leaves, you will not let it be just on the top of the tea leaves in the tea bowl or teapot. You will shake the tea bowl or teapot slightly in order to let the broken tea leaves sink to the bottom (as shown in the photo: chunks was on top but the broken one was at the bottom). After that, you pour the boiled water gradually with a circle direction to make the boiled water contacting the tea leaves evenly. The advantage is that the essence of the tea will be released gradually, but not abruptly. Certainly, if you try to pry the tea leaves apart with external force, you will get a strong tea broth abruptly because the tea leaves spread out almost instantly in a single infusion. Also, after you intervene the tea leaves manually, it would be hard to judge the infusion time for the next infusion. Honestly speaking, experienced tea masters will not follow strickly on the time schedule for each infusion. They will adjust the infusion for the next infusion according to the previous tea broth performance (by judging the color of the tea broth). Besides, personal speaking, intervening the tea leaves seems a little strange when performing the art of tea.

When you are not allowed to pry the tea leaves manually, one of the ways to stabilize the tea broth and try to make each infusion relatively stable is to use some broken tea leaves (as to how many, it depends on people, you may use 8:2).

Another point I would like to say is that I will not intervene the tea leaves. It is because after intervention manually, usually, the tea broth will become unclear. This might be due to the fact that some very tiny tea leaves which are supposed to be at the bottom of the utensil are lifted up to the surface by external force.

Anyway, I must stress that there are various ways to brew tea. Cloud just provides a way for your reference. You may adjust the proportion to 9:1, 8:2, 6:4 or even 5:5. The point is to find the best way for your own.