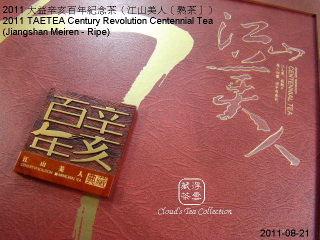 "江山意, 最難平. 美人如畫, 倩手寫春秋" (Photo: A2074) is the Chinese poem printed on the protective case of TAETEA Century Revolution Centennial Tea - Jiangshan Meiren (Ripe). The poem enhances the beauty and mystery of the entire set of teas. Reading from the enclosed translucent tracing paper with silver Chinese text on it, tea lovers will understand the details and the commemorative purpose of Jiangshan Meiren (Ripe), which literally means "An Empire & The Beauties". You may click here to see the text: Photo A2007.

After reading the silver text on the translucent tracing paper, one will get the idea that it is a memorial tea for commemorating the Soong sisters, Soong Ching-ling (宋慶齡) and Soong May-ling (宋美齡). One hundred years ago, the Soong sisters followed and assisted Mr. Sun Yat-sen devoting themselves to the revolution (If you want to know more about them, you may refer to the Wikipedia: Soong Ching-ling & Soong May-ling). Therefore, in order to commemorate the Soony sisters by elegant Puerh tea aroma, TAETEA has chosen finely selected Menghai tea materials for this particular 1911g ripe tea cake.

If tea lovers know Chinese, you will probably understand from the poem why it was so named as Jiangshan Meiren, which literally means "An Empire & The Beauties". From the poem, you will also find out that the tea leaves were carefully fermented before compression and the materials were finely selected from famous Puerh tea mountains, the Bada and Bulang. Under such an elegant name, how will it taste? 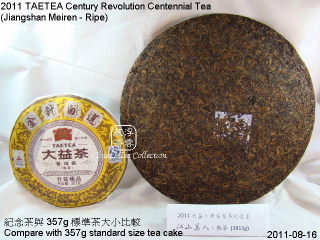 The dry tea leaves of Jiangshan Meiren were refreshing and sweet, like the sweetness of sugar cane. Smelling from the surface of tea cake, one can hardly found out any unpleasant earthy aroma after fermentation. In return, the light aroma would give you a refreshing vivid lotus flavor.

By judging from the surface of tea cake, the color of dry tea leaves showed its chestnut red with slight golden color. That was due to the fermented tea buds being spread on the surface. However, the back of tea cake showed chestnut red only. Overall, the tea cake was blended from selected fine-grade tea buds, which showcased its golden color after fermentation. Thus, thick and smooth tea broth taste would be expected.

That was a beautiful ripe tea aroma with great sweetness and smoothness. The flavor was thick without any unpleasant earthy taste so that the aroma of rinsing had already been attractive at the first place. The classical sweetness in the aroma had different levels. It was refreshing, multi-layers and concrete. 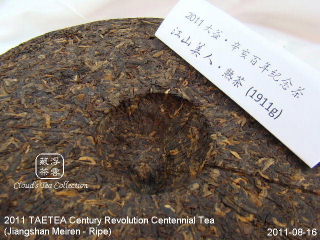 The color of tea broth was deep chestnut red. Although the color was deep, it was still transparently red. It was not a cheap ripe tea color. When smelling from the surface of tea broth, it was similar to the aroma of rinsing. It was round, thick and refreshing.

The tea broth of Jiangshan Meiren was vivid, elegantly sweet and thick. The major characteristic was its roundness. The extraordinary pleasant taste was very attractive and suitable for current consumption. That's why TAETEA is so reputable on ripe tea handling because it will give you confidence on traditional ripe tea tastes in their ultimate-priced ripe tea products (at least, it is the case in this tea). When you appreciate the Jiangshan Meiren, you will certainly be filled up with the beauty of a remarkably great ripe taste. The sensation is rich and nutritious. The marvelous aftertaste is consecutive. As what TAETEA stated in the leaflet, "it has fine and elegant sensation as if it were a piece of jade".

The degree of fermentation of Jiangshan Meiren is moderate. That means it preserves a certain extent of aging ability. Definitely, Jiangshan Meiren has a much higher ranking than other young ripe tea cakes. However, whether the regular TAETEA products can be competed with the Jiangshan Meiren or not, Cloud will write some other tea reviews in the future for direct comparison.

During the process of appreciation, you will notice that the taste will change subtly. The sweetness will change into an olive taste. The cool mouth sensation will be extended until some slight candy taste remaining in your mouth.

Certainly, if someone is fastidious about perfection, this tea can be criticized that it was not mellow enough. However, the mellowness should be the job done by time.