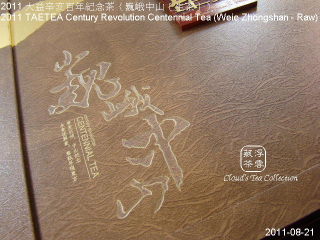 "華廈將傾, 中山挺立. 未竟復興業, 春訊早現東方" (Photo: A2071) is the Chinese poem printed on the protective case of TAETEA Century Revolution Centennial Tea - Weie Zhongshan (Raw). The poem implies that this is the prologue of the entire set of teas. Reading from the enclosed translucent tracing paper with silver Chinese text on it, tea lovers will understand the details and the commemorative purpose of Weie Zhongshan (Raw), which literally means "Majestic Figure - Zhongshan". You may click here to see the text: Photo A1983.

After reading the silver text on the translucent tracing paper, one will get the idea that it is a memorial tea for commemorating Mr. Sun Yat-sen. If you want to know more about Mr. Sun, you may refer to the Wikipedia: http://en.wikipedia.org/wiki/Sun_Yat-sen. From the enclosed leaflet, Mr. Sun's granddaughter Miss Lily Sun mentioned that "1911 Century Revolution was a whole nation revolution against the imperialism and the feudalism for national survival. It started a new path for restoring the glory and prosperity of Chinese nation." Miss Sun wrote a Chinese calligraphy personally for this centennial tea, "辛亥茶思, 百年淵源", which literally means "The tea spirit of Century Revolution originates from a hundred years ago". This implies that Chinese tea culture is always very important to Chinese people. With its long history, Chinese tea is an essential and indispensable part of life in Chinese nation.

If tea lovers know Chinese, you will probably understand from the poem why it was so named as "Weie Zhongshan", which literally means "Majestic Figure - Zhongshan". Under such an imposing name, how will it taste? Cloud will give you some clues.

The dry tea leaves of Weie Zhongshan (Raw) were refreshing and sweet. A very slight smoky smell was noticed. However, Cloud was of the view that such slight smoky flavor was from the astringent characteristic of fine raw materials. This smoky smell was different from the truly smoky smell from those low-priced cheap teas. When Cloud smelled the dry leaves, it showed its thickness, massive aroma and attractive sweetness. By judging from the fragrance of dry leaves, one would find the concrete sensation and flavor of this tea.

The color of dry tea leaves was honey-like. It was so amazing that Cloud would like to name this as "Honey Green". From the surface of tea cake, Cloud noticed that some leaves had aged into a light reddish color. That meant some aged raw materials were blended into the tea cake. 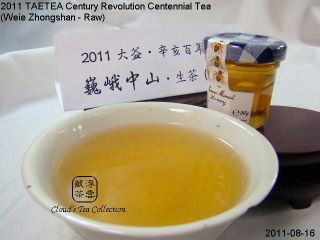 Since Weie Zhongshan (Raw) was the first tea to be appreciated in the whole set of TAETEA Century Revolution Centennial Tea, Cloud was eager to learn about everything of it. When hot water interacted with the leaves, the aroma of arbor tea was apparent. It was thick and very refreshing with a slight soft honey taste. Although the smell was young in general, some aged aroma was hidden inside. The fragrance was not the same as those 2011 completely new young raw teas. Obviously, some aged raw materials were added. Even though some bitterness in the soft pleasant aroma was noticed, it was the origin of later aged smell before transformation.

When the temperature of tea leaves had dropped a little bit, the aroma changed. An attractive cold fragrance rose from the warm tea leaves. That aroma was vivid, sweet and very refreshing to someone who had been working hard.

The color of tea broth was absolutely honey-like (photo taken with a small bottle of honey: A2004). It was a bright reddish-yellow color. That indicated that some aged tea leaves must have been blended into the tea cake. When smelling from the surface of tea broth, Cloud discovered that the aroma was soft and kept changing. It was a great pleasure of enjoyment.

The Weie Zhongshan (Raw) had great thick and soft tea broth. It was nourishing and not irritating like other really new young teas. Obviously, this was the credit from arbor tea materials. The refreshing sweet aftertaste was a great appreciation sensation as if someone was strolling on the lawn in a very relaxing way with an extraordinary great weather. Cloud believed that the ratio of aged tea leaves blended in this tea was high. As a result, the tea broth taste was naturally sweet. Concluding the overall feelings of this tea with one word was "Refreshing". The appreciation experience as a whole was great and unforgettable. That's why TAETEA announced that this was the first tea product of Master Tea Series.

After having the tea, one could find the remaining aroma in the little cup was so naturally sweet, elegant, excellent and high-class.

Certainly, if someone is fastidious about perfection, this tea can be criticized that a slight leftover astringent taste was found on tongue. It was due to its relatively young age. Even though it has been blended with aged tea leaves, the overall age must be less than 5 years. Cloud believes that time will correct such a minor imperfection. It will be a great tea in the future and worth waiting for.

1. Opening the outer wrapper to the white inner wrapper
http://www.youtube.com/watch?v=IBxeVwM4RgY

3. Chipping off some tea leaves from the tea cake
http://www.youtube.com/watch?v=OzGybxTErmo