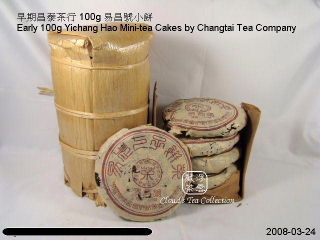 Changtai Tea Group, Changtai Tea Factory, Changtai Tea Shop and Yichang Hao, etc. are the names familiar to the tea lovers and tea connoisseurs nowadays. However, in the year of millennium, the market was still dominated by traditional Menghai and Xiaguan tea cakes. It seemed that only the tea cakes which were wrapped by Eight-zhong trademark logo wrapping papers were the main stream and genuine tea cakes (including those special tea cakes ordered by the CNNP). It was hard to imagine there was a new tea shop who dared try a new packaging for their new series of tea cakes, Yichang Hao. It was a revolutionary new style of wrapper on which tea lovers would find ancient Chinese style characters, Seal Characters (Chinese: Zhuan Characters, 篆體). Besides, the raw tea leaf materials were also revolutionary - using the Yiwu tea. That was the reason why it was called Yichang Hao. Yi means Yiwu. Chang means Changtai.

On the wrapper, Yiwu Seven-son Tea Cake (易武七子餅茶) was clearly printed. This gave a great impact on the Puerh tea market. People started to think about ancient tea trees seriously. This new element vitalized the boring market. At least, traditional Puerh tea lovers in Chinese community had to set aside the controversy over the dry/wet storage for a while and started to think about what Yichang Hao was.

Nobody Knew about Yichang Hao

At the very beginning, Yichang Hao was unknown to people.

Cloud did not say it indiscriminately. The famous Chinese discussion forum, http://www.wwwart.com.tw/tea (which was closed on 2007-05-18), kept the record of this thread, "What is Yichang Hao?" (time: 2001/7/25 11:56:47am). Unfortunately, the website was closed eventually. You may click the Captured Photo 1 and Captured Photo 2 to view the relevant part (Chinese edition only). This is a true record of discussion at that time.

In 2001, the Taiwanese were very good at appreciating Puerh tea, in particular, the aged Puerh vintages. However, only few people knew about Yichang Hao. This indicated that this brand was extremely new to the market. People did not know there was a new brand produced. It was very interesting to hear that someone treated it as a new gimmick of tea vendors. However, this also proved that there was lacking of proper information in the market at that time. The responses of many tea lovers were, "I have never heard about Yichang Hao. What is it?" Certainly, it will a weird comment if you hear that from a tea lover today. Nevertheless, that comment was in fact reasonable to be made at that time because, normally speaking, only the Antique Puerh Vintages were called "Hao" such as Songpin Hao (Chinese: 宋聘號), Chenyun Hao (Chinese: 陳雲號), Jingchang Hao (Chinese: 敬昌號), etc.. Therefore, it was understandable that somebody might comment that "Yichang Hao was a gimmick". 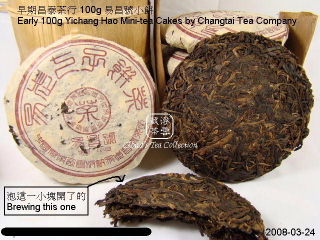 Perhaps, it was the luck of Cloud. Seven years ago, when Cloud searched for some newly made young teas for future consumption (after a long storage), Yichang Hao appeared. At that time, Yichang Hao was amazing to Cloud because it had many different shapes and grades. Yichang Hao could be tea cakes, tea bricks (Photo: Yiwu Tea Brick）or bowl teas. Different styles had many different sizes. It would be much fun to collect all these interesting teas step by step (Photo: Some Early Yichang Hao Collections. This is a "bad" habit of a collector that every single style of tea has to be collected, just like stamp collecting. Unfortunately, various kinds of Yichang Hao were sold in 2000 and some shapes had been sold out. It was not easy to collect the whole series at that time. Therefore, Cloud could only select those good and to be good for self-consumption. If Cloud has time in the near future, photos should be taken for showing you the series of Yichang Hao collected. That will become the records. The 100g Yichang Hao mini-tea cakes were noticed by Cloud under such circumstances. Cloud was attracted by its uniqueness and aging potential. 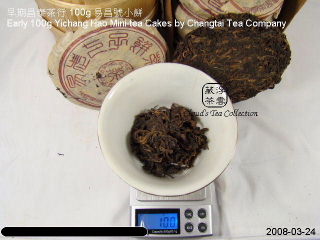 Traditionally, tea cakes were mainly 357g. Not like the mini liquor, Puerh tea did not have the mini-tea cake market in the past. However, Yichang Hao vitalized such market. Changtai produced these 100 mini-tea cakes for testing. From the collectors' point of views, they fitted for the purposes:-

Therefore, Cloud decided to purchase some Yichang Hao 100g mini-tea cakes for future consumption. Time went quickly. Cloud has been hoarding these mini-tea cakes for 7 to 8 years. Coincidentally, the tea also reached its 7 years of aging. 7 is a magical number of aging year.

Recently, somebody posted a thread about this tea in the Chinese discussion forum. This reminded Cloud that it was a time to check out and taste how it aged. Wow! Unbelievable. The taste was very different from what Cloud had tasted many years ago. Its "sudden" change (due to not being tasted many years) triggered Cloud to write down an Internet article to record such aging conditions for future references.

The aroma of Yichang Hao 100g mini-tea cake is soft and rich. Apart from that, it is also a complex and long-lasting fragrance with sweet and tempting feelings. Amazing and unforgettable! It is one of the long term self-stored tea cakes by Cloud since it was produced. The storage condition is perfect (definitely! Otherwise, why bother to store Puerh tea ourselves?). It is completely free from any unpleasant smell. The aroma has been aged into soft and gentle smell. That is gorgeous. It is very different from those astringent smell of some other young raw tea cakes.

Awaited tea broth is released from the boiled water. It gives light to medium red color, nearly chestnut red. This is a perfectly normal tea broth as it already had 7 to 8 years of aging. When the tea ages, the tea broth color will become deeper and deeper. This is one of the aging indicator people are waiting for.

One can notice that the raw tea leaf materials of Yichang Hao 100g mini-tea cakes were strictly selected. From the surface of the mini-tea cake, the intact and thick tea leaves were blended with appropriate level of tea buds. This appropriate blend will enhance the overall performance of the tea sensation. In addition, this also enhances the outlook of the tea cakes. Of course, Cloud knows that the dry tea leaves have to be brewed eventually. Thus, the tea broth performance is the most important part.

There is no disappointment of Yichang Hao 100g mini-tea cake. It is wonderful. Vivid and clear tea broth gives a dynamic sensation. One can feel its sweetness under the tongue. The pleasant and soft aroma will stimulate the nose's receptors at exhalation. Tea broth is very rich and thick and full of aged Yiwu tastes and styles. It offers complete, round and rich finish in one's month after have a sip of such, excellent feeling at this moment.

If one takes two more infusions, the light tea broth will show its softness. By judging its performance at this stage (i.e. no need to age for further several years), it has already equipped with great appreciation value. It is a good tea to be appreciated while hoarding.

After this trial taste, this indicates to Cloud that it is the right time to start appreciating it after 7 to 8 years of hoarding with very low consumption. As Cloud has other very aged vintages, otherwise, it would be hard for Cloud not to drink a lot of this tea starting from this year, 2008. 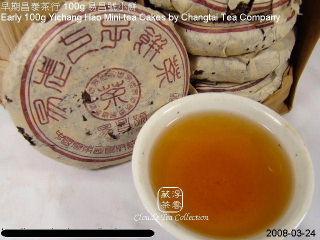 When Cloud exhales gently, Cloud discovers the fragrance of such is very elegant and mellow (to a certain extent). The aroma can be easily accepted and is not like some low-grade newly made tea cakes which are full of raw and green astringency (that is a low-end grass smell).

The tea broth sensation of Yichang Hao 100g is deep, long and rich. It can let you relax. The obvious Yiwu taste will touch many tea lovers' hearts as it offers a natural feeling. Even though one may appreciate it alone, there will not be any loneliness because it has a warm, complete and round elegancy. It projects the image of how those Yiwu new tea will taste in the next 7 to 8 years. It gives confidence to tea connoisseurs on those newly produced genuine Yiwu tea hoarding in their tea cellars.

As the tea broth of Yiwu tea is quite soft and acceptable, it may cause doubts to beginners on its aging potential and ability. Certainly, the Yichang Hao 100g mini-tea cake is the pioneer of the recent young Yiwu tea. It shows the aging ability. The most important aspect is the deep and elegant sensation with its long-lasting finish. When the mouth is full of Yiwu taste, the tea connoisseur will start to understand why those antique family tea firms which produced a lot of antique Puerh vintages set up their businesses in Yiwu. When the market focuses on "Yiwu Original Mountain Wild Tea" (i.e. Green Big Tree Tea Cake), in fact, the tea leaves blending in the early Yichang Hao can also provide similar tastes. Besides, apart from 1999 Yichang Hao, the tea leaves blended in some early Yichang Hao were also good materials. At the present moment, although they may not be recognized by the market, they will showcase their strength in the future. If they are still inexpensive, it should be a part of the collections.