The most attractive aspect of aged Puerh vintage is its varieties between different aged Puerh teas. After a long period of aging time, say 20 years, these Puerh teas will develop different aromas, tastes and aftertastes according to their different recipes, storing climate and aging conditions. They aren't single and boring. Perhaps, because of the huge difference of tastes between these aged Puerh vintages, tea lovers from other kinds of tea start to study, investigate and eventually love to brew and drink these Puerh vintages. Owing to the great impressions given from these old Puerh tea broth, tea aficionados always can't stop having another sip immediately after the last sip. In order to secure having the special taste from a certain kind of special Puerh, tea lovers will buy enough quantity for their future consumptions.

It is the same for Cloud to do so when Cloud met this amazing 1980's 7532 several years ago. Within the budget, Cloud bought enough quantity in order to make sure that Cloud has enough 1980's 7532 tea cakes for the future enjoyment. That's why Cloud can enjoy this 7532 whenever Cloud wants a sip. Although there is enough quantity for often appreciation, the number of tea cakes is not as large as those daily Puerh tea. Therefore, in the collections of Cloud, this 7532 is the precious grade for appreciation. The maximum frequency can only be one brewing per week. Otherwise, this tea will all be consumed in several years. In order to allow this aged 1980's 7532 having a good revitalization, Cloud use a small pottery to contain the chipped off tea leaves. 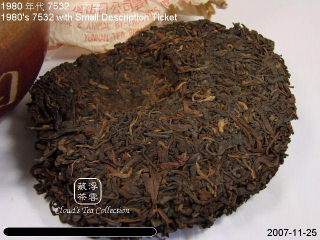 Several months ago, Cloud noticed that the small pottery was almost empty. It was the right time to break some more from the tea cake to refill the tank so as to get ready for the future use. Traditional Chinese people have a tradition that "tank should always be full". That was to pray for wealth because people did not need to worry about the necessities, such as rice, in the tank any more if it is always full.

"Seventy-five Three Two (7532)", by its literal meaning, you will know that it was a recipe invented in 1975 blending with the 3rd grade tea leaves by the Menghai Tea Factory (the fourth digit "2" is the code for Menghai Tea Factory). From the photo A0678, we can notice that the recipe of 7532 (by comparing the shape of tea leaves on the back of tea cakes), is substantially different from that of the 8582 of the same era. From the back of the 7532 tea cake, there are obvious fine tea buds while evident old tea leaves are on the back of the 8582 tea cake.

If the 7532 and the 7542 tea cakes are compared, they look similar because the grades of tea leaves were very close. Certainly, if there are real objects for comparison, experienced tea connoisseurs can still distinguish from one to another. The key point for differentiation is that the recipe of 7542 contained 5th grade tea leaves as well. By careful observation, the dry tea leaves of 7542 are slightly bigger than that of the 7532 (Reference photo of classic 7542: the Eighty-eight Raw Tea Cake). In addition, obviously, the tea cake of 7532 carries more fine tea buds. Without doubt, this needs certain degree of experience to tell the differences. From the photos, one can notice that the tea buds show their golden color after more than 20 years of aging. Although the sample tea cake had been stored wetly, the degree of wet storage was very low. It is only a mild wet storage tea cake. Therefore, this storage condition was not harmful to its quality. On the contrary, this slightly wet storing environment enhanced its aging and gave the amazing performance of tea broth, aftertaste and finish of this 7532 of the 1980's.

"Appropriateness" is the best. Cloud must stress that blending with certain amount of fine tea buds can help to improve the sweetness and richness of the tea broth. A bunch of flowers may be great, but putting some green leaves together with the flowers will largely embellish the outcome. Therefore, pure tea buds in a tea cake sometimes may mean only a bunch of flowers without a leaf. Certainly, Cloud knows that some tea cakes are totally blended with tea buds. Although they may taste fresh and attractive instantly, Cloud have doubts of their aging abilities. In short, even though a 7532 tea cake had more tea buds, it does not mean that it was a pure tea buds tea cake. 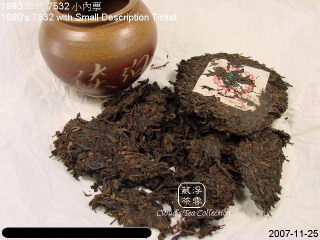 Chipping Off Some Pieces

It was quite easy to chip off some pieces from this aged 7532 tea cake after its more than 20 years of aging. Certainly, this batch of aged 7532 was not highly compressed at that time. After Cloud broke the tea cake, it could be found that there were more tea buds blended inside. This evidences that this was truly a 7532 recipe. It is because, generally speaking, the center of the aged 7542 tea cake are the 5th grade tea leaves. However, usually, the aged 7532 tea cake was blended with more fine tea buds.

Beginners may have peculiar feelings that why we have to conduct the archaeology on Puerh tea in order to prove and ask for their years of production and recipes. By comparing with the newly made tea cakes, which often have their information and recipe details printed on the wrappers or packaging, the aged Puerh vintages do not provide such information. Although it is not necessary for the customer to guess the age of the latest tea cakes, that is not the case for the aged Puerh vintages.

The story is like this. In the traditional Hong Kong tea market in the old days, i.e. the 1980's to the early 1990's, tea cakes were only the very ordinary commodities. The usual way to handle tea cakes was to store the raw tea cakes and ripe tea cake separately. That was the way how tea vendors treated their tea cakes in that era. They did not further classify them by their recipes because they regarded all the tea cakes as the same product. As novices can notice from these aged Puerh vintages that all the wrapping papers were printing "Yunnan Seven-son Tea Cake (Yunnan Chi Tse Beeng Cha)". It is hard for new comers to differentiate between them. In fact, it was the same for the tea vendors. Besides, these tea cakes shared similar textures of wrapping papers. It was not surprised that tea vendors had treated them as the same because these were all just "Yunnan Seven-son Tea Cakes" in their minds.

Furthermore, the retail tea shops in the old days would not tell the customers about the trading codes of the tea cakes. They would re-label the tea cakes with different Chinese names according to their aging conditions such as Aged Puerh Tea Cake - Precious Grade (Chinese: 珍藏普洱茶餅), Home-stored Aged Puerh Tea Cake (Chinese: 家藏普洱茶餅) (p.s. It is just a name in Chinese. It does not mean that the tea was really stored at home) or Aged Puerh Tea Cake (Chinese: 陳年普洱茶餅), etc.. 20 years ago, there was no Puerh tea enthusiasm. Therefore, it was reasonable for tea vendors to store the 7542 and 7532 tea cakes together without differentiating between them. This was one of the characteristics of the messy and confusing part in the Puerh tea history. 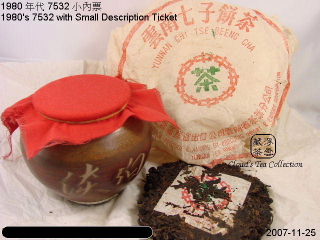 This Sunday was a good day for resting. All of a sudden, Cloud missed a sip of this mellow but vivid aged Puerh vintage. The aged 7532 is truly a raw Puerh vintage with its aged aroma and taste. From the various tea collections of Cloud, this 7532 was the first choice.

Although this tea was the traditional Puerh tea stored in the Hong Kong warehouse, the degree of wet store was very mild. There was absolutely no unpleasant earthy or woody smell. On the contrary, it carried soft, pleasant, mellow and gentle aged aroma. From the dry tea leaves, there was only slightly grey. The details were still clear. In particular, the tea broth showed its clearness and reddish color. It was a shiny and bright liquor without any darkness. Since the aged 7532 was blended with a high and right proportion of fine tea buds, it would give sweet aroma from the tea broth as if it were a beauty showing her charming attractiveness. Although the tea broth was a little bit humble and not too strong, it gave an evident and extensive power which would spread to one's mouth entirely. It was absolutely a gorgeous and delighted experience to have several sips of this amazing aged 7532 Puerh vintage.

The 1980's 7532 aged Puerh vintage has its tea broth thickness, mellowness, sweetness and vividness. It offers an incredible aged and soft aroma which is totally irresistible. This is the most fantastic attractiveness of appreciating aged raw Puerh. Because of this lure, it may be embarrassing for tea aficionados to take one cup immediately after another cup without a reasonable pause. Although the tea broth offers a very comfortable feeling in the stomach, one will be attached to its mellow and soft tea broth and want the liquor to stay longer in the mouth feeling how good it is. What a contradiction! 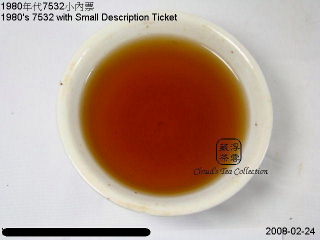 Eventually, the tea broth must go to the stomach. When it passes through one's throat, it will offer the second enjoyment. By a very slight exhalation, the tea aroma in the tea broth will be exhaled through the nasal passages and cavities. The sweet, pleasant and mellow particles will stimulate the receptors to give the joyful enjoyment. That's why Cloud calls its as an AMAZING aged 1980's 7532. One will enjoy this tea very much.

After about 7 to 8 infusions, there is no sign for any decline of its performance. However, at this moment, it changes to another appreciation level. The tea broth becomes sweetly smooth, but it is not thin. Every infusion afterwards is still stimulating one's tongue. It can maintain its stable thick tea broth. Not until having more than 20 infusions of this satisfactory sweet tea liquor, no tea connoisseur will ask for a stop.

Sometimes, Puerh tea beginners may not fully understand why the genuine well aged Puerh vintages are so expensive. However, there must be some reasons for those who can afford and are willing to pay the high price for exchanging an aged tea cake for his/her personal enjoyment. Cloud is of the view that this aged 1980's 7532 will give some clues.